All the Best Features of Celebrity Cruises' Edge Series of Ships

There are currently three ships in the state-of-the-art Celebrity Cruises Edge series: Celebrity Edge, Celebrity Apex, and Celebrity Beyond. All three ships feature the same overall design and the inspired elements of their class, like the incredible Magic Carpet, Infinite Verandas, and an exclusive experience known as The Retreat. However, there are also some important differences between them, making each ship truly one-of-a-kind. 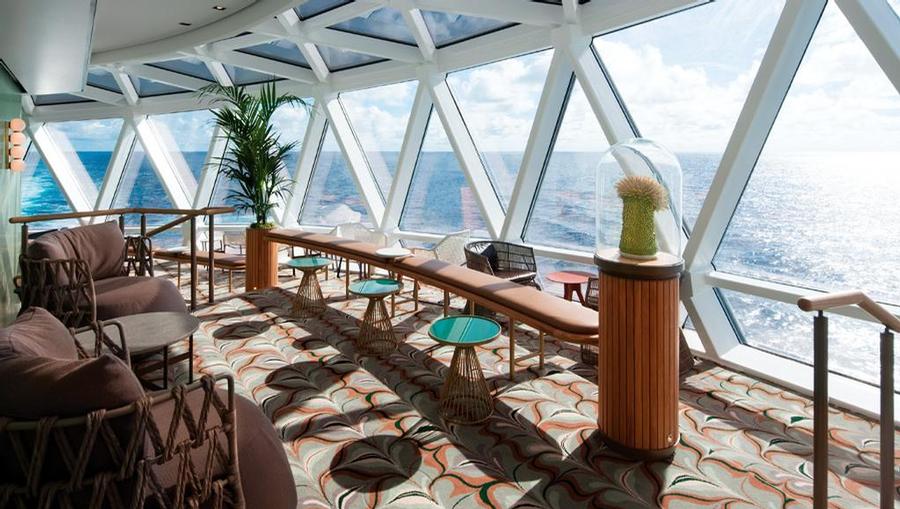 The cutting-edge Eden onboard Celebrity Apex.

Check out our Featured Celebrity Edge Class Cruise Deals and speak to a Travel Planner in the Avoya Travel NetworkTM to cash in on exclusive deals.

It all began with a departure from traditional cruise ship design and the creation of a unique, outward-facing ship design instead. This visionary approach was made possible through a completely three-dimensional planning process, allowing designers to optimize every single detail for maximum guest comfort and relaxation.

The first ship in the Edge series was Celebrity Edge, which set sail for its inaugural trip in December 2018. Celebrity Edge departs from Fort Lauderdale, Florida and Rome, Italy, with destinations both in Europe and in the Caribbean.

It has a double occupancy of 2918 and 178 possible connecting stateroom options for your travel party. Those may be impressive facts and numbers on their own, but what really sets Celebrity Edge apart is the unparalleled experience offered aboard. 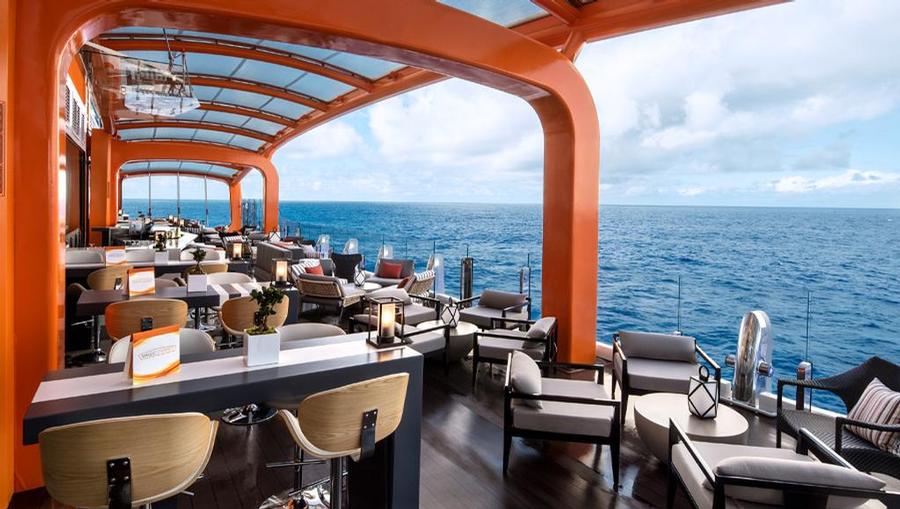 One of the most remarkable features introduced by the Edge series cruise ships is the Magic Carpet, a suspended, cantilevered platform on the ship's starboard side (the first of its kind in the world). The Magic Carpet serves two functions: to facilitate safe and accessible embarkation and disembarkation and to act as a dining and lounge area while at sea.

The platform is capable of soaring to a height of 13 stories above the water, offering incredible views. Celebrity Edge provides a plethora of additional dining options--you will never be wanting for cuisine variety when on board. In fact, the ship is home to 29 different food and beverage opportunities crafted by Michelin-starred chefs. 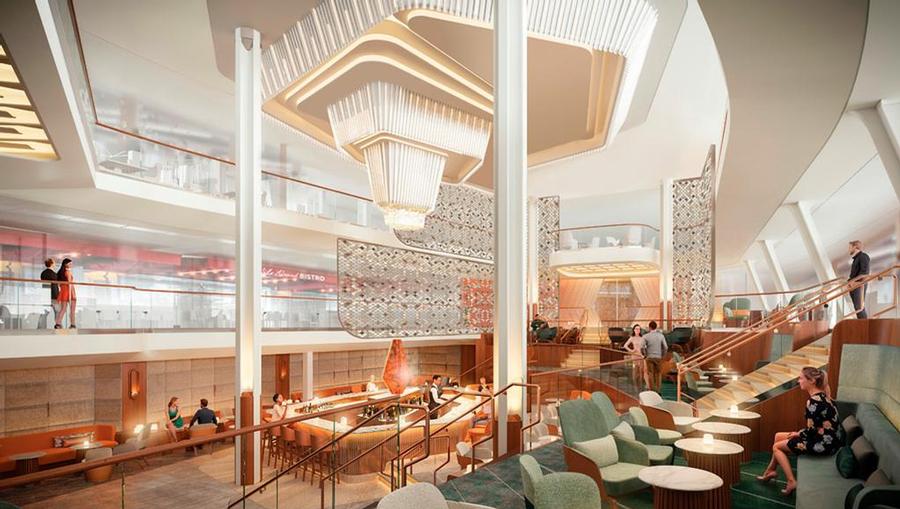 Another notable feature of Celebrity Edge is the Grand Plaza, a glamorous gathering space styled after an Italian piazza that includes several restaurants and bars. The multifaceted Eden room is a space where guests can truly unwind while surrounded by nature, and the Resort Deck is a bustling outdoor space complete with an outward-facing pool, the Rooftop Garden, and the adults-only Solarium. Guests can enjoy an even more exclusive experience at The Retreat, which includes incredible accommodations, a private sundeck and lounge, and a private restaurant. 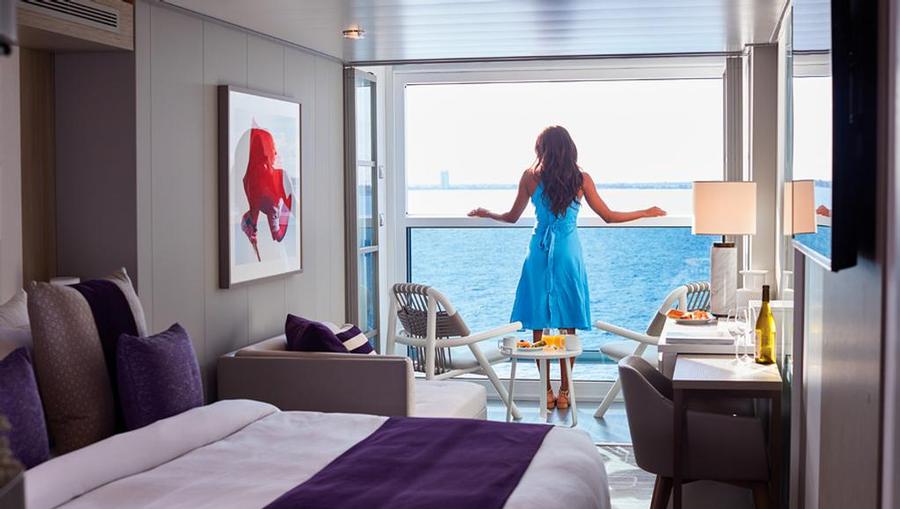 The innovative outward-facing design of the Edge series ships also allows for the ships' Infinite Veranda staterooms. An incorporated patio blurs the lines between the indoors and outdoors, letting guests enjoy unfettered, open-air access. Other comfort aspects of the room can also be seamlessly adjusted according to your needs and preferences.

Celebrity Apex: A Sister Ship with All the Right Upgrades

Celebrity Apex is the second ship in the Edge series and a sister ship to Celebrity Edge. It has the same occupancy capacity and the same Infinite Veranda staterooms that take advantage of the outward-facing design. Celebrity Apex also boasts the same visionary spaces that made the Celebrity Edge such a game-changer. You'll get to dine and lounge on the Magic Carpet, feel the energy of the Grand Plaza, relax in the Rooftop Garden, and enjoy the outdoors on the Resort Deck.

One of the main areas where Celebrity Apex expands on the offerings of Celebrity Edge is in the cuisine. The Magic Carpet and other restaurants feature enhanced menus that are designed to bring even more variety to the cruise dining experience. Additionally, the ship introduces an entirely new venue known as Craft Social, which seeks to highlight rare beers, craft cocktails, and wines on tap.

The Eden Room's Wonder at Eden

The Eden room also received an update in the form of a nighttime experience called Wonder at Eden. Stop by each night of your journey for a series of events created to reawaken your sense of wonder. New Year's Eve-inspired galas, "deep chill" nights, and romantic evenings fuse music, libations, and interactive technology into an unforgettable time.

Celebrity Beyond: Innovation Taken Even Further

Celebrity Beyond is the third ship in the Edge series, set to join the fleet in April 2022. With Celebrity Beyond, designers sought to take the innovative aspects of the series even further. Expanded open-air spaces and more ways to relax await the ship's enlarged capacity of 3260 occupants.

More Space Than Ever Before 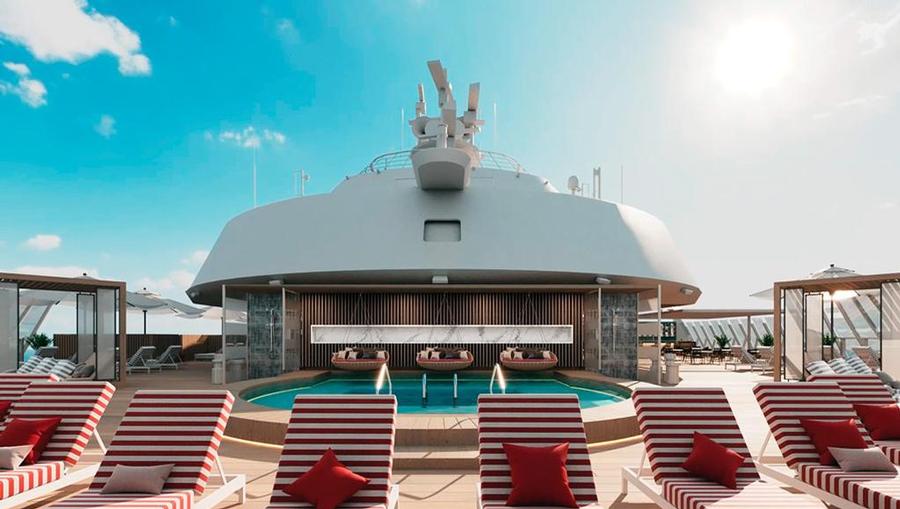 The ship has been elongated to ensure ample space and comfort for all travelers, as well as for several new venues. One of these venues is Le Voyage, the first signature restaurant by world-renowned chef Daniel Boulud, who serves as Celebrity Cruises' Global Culinary Ambassador. Celebrity Beyond also features a new, two-story Sunset Bar imagined by interior designer and TV personality Nate Berkus, as well as even more luxurious updates to The Retreat.

Perhaps the most exciting aspect of Celebrity Beyond is the reimagined Rooftop Garden, which brings guests closer than ever to the water's edge. A joint venture between architect Tom Wright and designer Kelly Hoppen, the new Rooftop Garden features cantilevered float pools that extend out over the open ocean. It's one experience that you don't want to miss on this latest addition to the trailblazing Edge series. 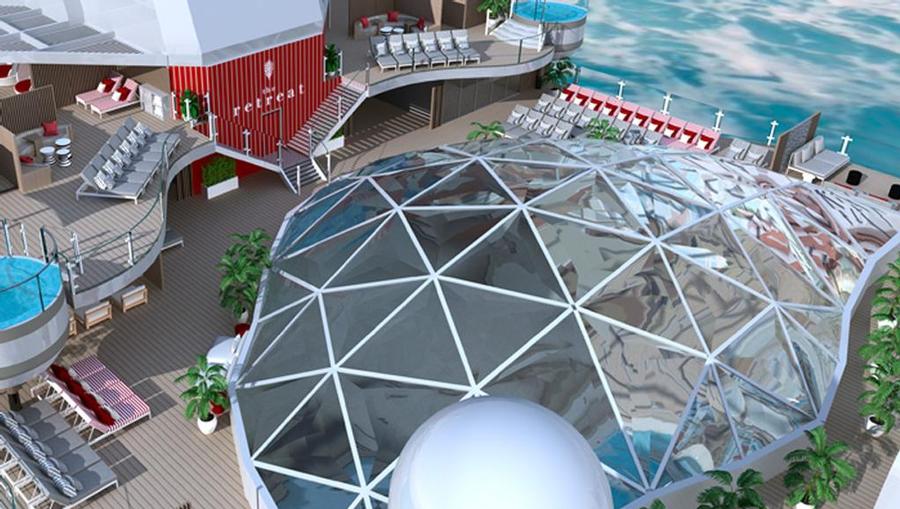 The stunning Rooftop Garden onboard Celebrity Beyond.

Related: Three Exciting Things to Know About Celebrity Beyond